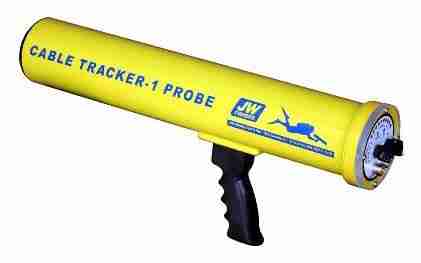 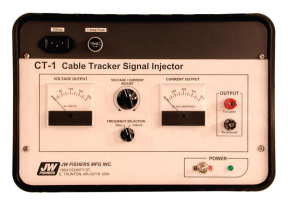 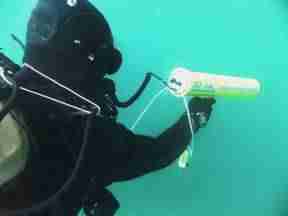 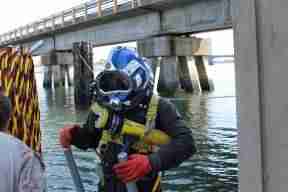 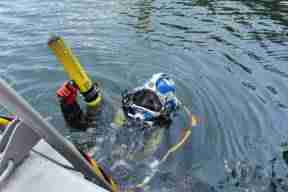 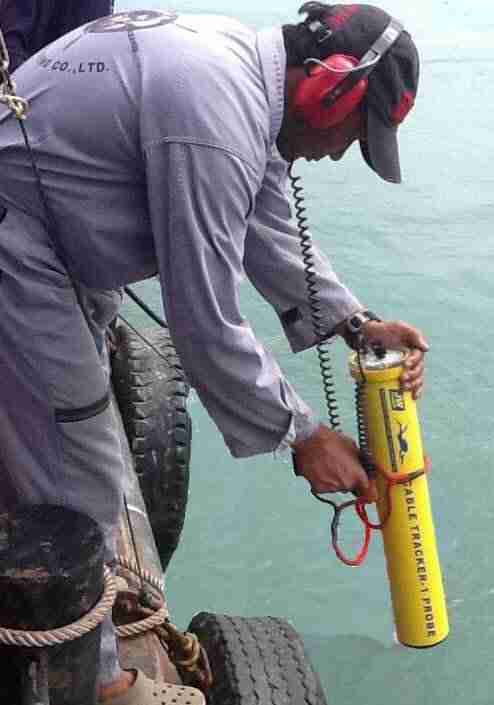 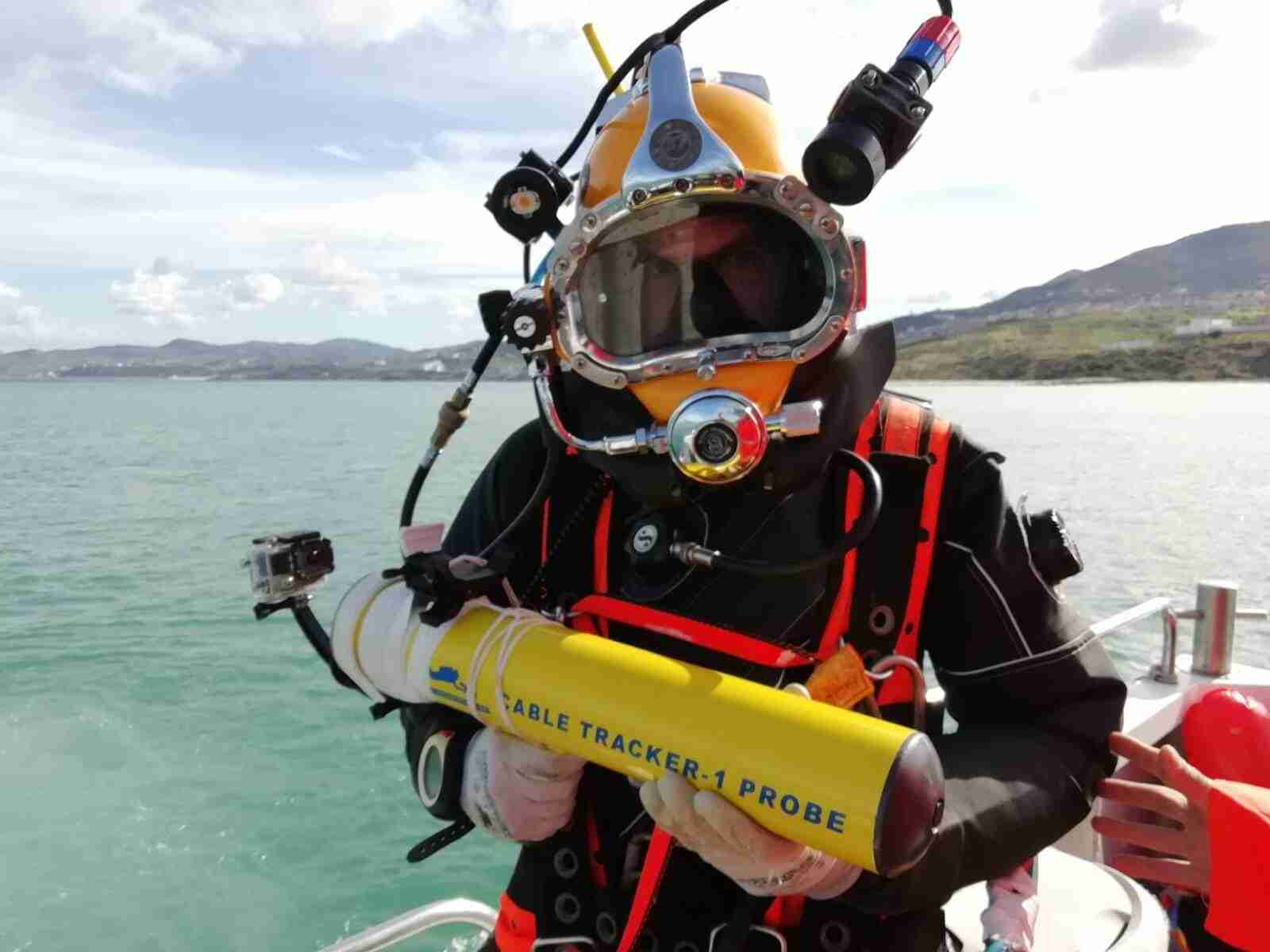 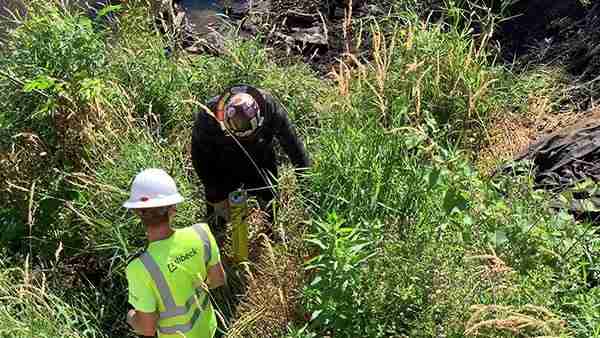 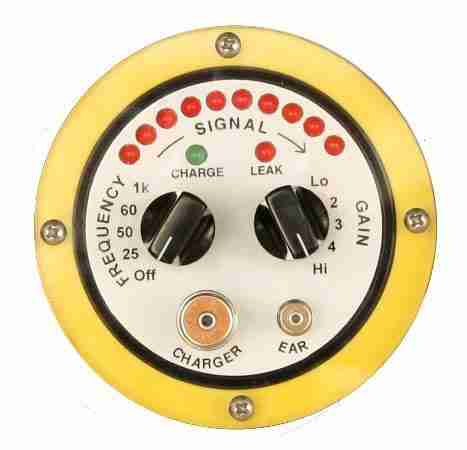 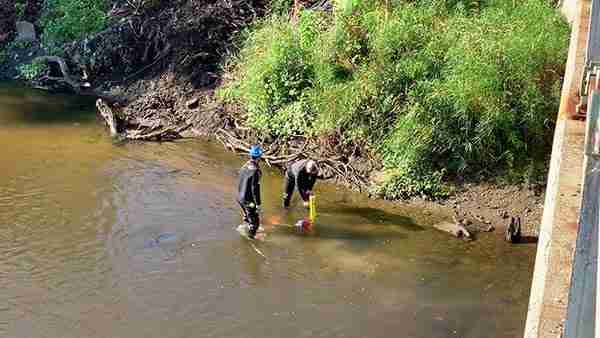 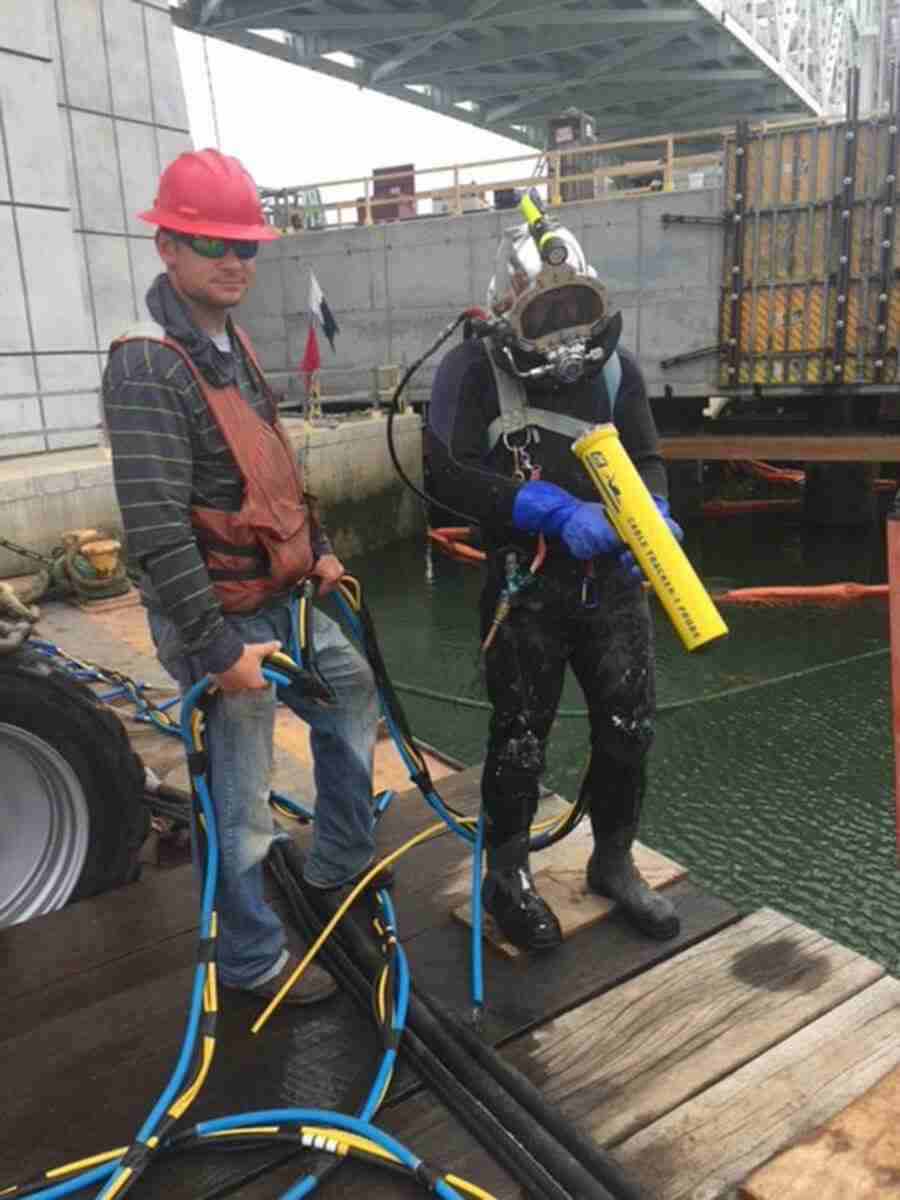 The Cable Tracker 1 system consists of the Signal Injector control box and the Cable Tracker Probe. The Signal Injector is attached to an exposed part of the cable on land. A 25 Hz or 1,024 Hz signal is induced into the cable. The operator carries or swims with the Cable Tracker Probe along the length of cable receiving the transmitted signal. Typically the lower frequency 25 Hz signal is initially used to locate the cable as it can be detected from greater distances. Once the approximate location of the cable is determined, the 1,024 frequency is used to precisely pinpoint the exact location of the cable. When searching for power cables, or multi-conductor communications cables, it is not generally necessary to use the Signal Injector as the Probe can detect the frequency of the AC signal (50, 60, or 1024 Hz). A switch on the Probe allows the operator to select the frequency.

So effective is the Cable Tracker 1 system at tracking and pinpointing cables that, in many cases, the cable can be located and tracked in shallow water from a small boat on the surface. The operator places the nose of the probe in the water and sweeps it back and forth until the signal is received. Once the cable is located, the cable can easily track it from the surface. If necessary, a diver can be deployed to precisely pinpoint the cable position.

An internal rechargeable battery pack powers the CT-1 Probe for 6 to 9 hours of continuous use. Two battery chargers are included with the system; a 100-240 volt AC charger and a 12 volt DC charger. The Signal Injector is powered by 120 volts AC only. 220/120 voltage converters are available for the signal injector to be sourced from a 220 volt AC power supply.

FISHERS CT-1 CABLE TRACKER
JW Fishers Cable Tracker 1 (CT-1) is a precision electronics system with a commercial-grade Signal Injector and Cable Tracker Probe. Specially designed to locate and track buried cables, including power and communications cables, the system locates cables buried on land or underwater. The CT-1 will also identify the fault or breakpoints that are exposed to water.

In most cases, the 1,024 Hz signal is injected because the higher frequency makes less interference from surrounding power wires. The military often uses the 25 Hz signal for tracking cables. The Signal Injector has a switch to select 25, 50, 60, or 1,024 Hz and a control knob to adjust output power. A low current setting (100 mA) is used for most cables, and a higher power (up to 500 mA) is used for hard-to-find cables. Once the output power level is set, the output current is automatically regulated to give steady Probe readings. The Signal Injector is powered by 120 volts AC, or 220 volts AC with an optional transformer.

The Cable Tracker Probe operates on its own internal 9-volt battery pack. The Probe frequency switch can be set at 25, 50, 60, or 1,024 Hz to match the signal source. If the cable to be located is a 50/60 Hz power cable, it can be tracked underwater without using the shore-based Signal Injector. However, when tracking power cables on land, the 1,024 Hz frequency may have to be used due to 50/60 Hz noise in the air. If the cable to be located is a live multi-conductor communications cable (no AC power lines), the 1,024 Hz frequency is used and will pick up the cable without using the signal injector.

As the probe approaches the buried cable, the signal gets stronger in the earphone, and more segments are lighting up on the LED bar graph, indicating a stronger signal. When the diver is directly over the cable, the signal will suddenly drop to near zero (called the null-spot). If the diver goes past the cable, the signal will jump to full scale again. The cable is easily pinpointed by pointing the Probe directly at the bottom and slowly moving the probe back and forth. The probe will be pointing directly at the cable when the readout goes null.
The unit can calculate the burial depth by taking a second reading with the probe held at a 45-degree angle and a second null point obtained. The burial depth will be the same as the distance between the two null points on the surface.

So effective is the Cable Tracker 1 system for tracking and pinpointing cables, that in many cases, the cable can be located and tracked from a small boat on the surface. The operator holds the nose of the Probe in the water and operates it as stated above for the diver. Once the cable is located and tracked from the surface, the diver enters the water and descends to the bottom, where the cable is pinpointed.

220vac transformer: Allows CT-1 signal injector box (ONLY) to be powered from 220 volts